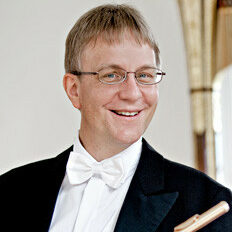 Michael Martin Kofler was born in Villach, Austria in 1966 and obtained a Flute Performance degree with distinction at the Vienna Musikhochschule under Werner Tripp and Wolfgang Schulz, as well as studying with Peter-Lukas Graf at the Basel Music Academy.

In 1987 Sergiu Celibidache invited him to join the Münchner Philharmoniker as Principal Flute.
He has been honored with many prizes at competitions (ARD, Brussels, Prague, among others) and was also the recipient of Cultural Endowment Prizes awarded by the Münchner Konzertgesellschaft and by the Austrian state of Carinthia, as well as receiving an honorary prize from the Austrian Ministry of Science and the Cultural Prize of his native city of Villach.
Since 1983 Michael Martin Kofler has performed concertos, recitals and chamber music as a flute soloist throughout the world and has also been featured as a soloist and chamber ensemble member on DVD, CD and in recordings for radio and television. He regularly performs as a soloist with renowned orchestras such as the Academy of St Martin-in-the-Fields, the Australian Chamber Orchestra, the Budapest Strings, the Vienna and Munich Chamber Orchestra, and the Philharmonic and Symphony Orchestras of Munich, Prague, Moscow, Tokyo, Tel Aviv and Warsaw.

Since 1989, as a professor at the Mozarteum Salzburg Michael Martin Kofler has worked with considerable success with a solo performance master class, and has been invited to important international competitions as a jury member, as well as to teach master classes in Europe, Asia and America.